Bees lose to Loughborough in final league game of the year

Click here to download a full list of scorers from today’s games. For full fixtures, results and tables from across the country, click here.
Surbiton ended Hampstead & Westminster’s perfect start to the campaign with a brilliant win in the final round of Vitality Women’s Premier Division action before the mid-season break.
Heading into the weekend, Hampstead & Westminster’s record read nine matches, nine wins, but Surbiton – themselves also unbeaten this term – ended that streak with a 3-2 triumph.
Darcy Bourne gave the hosts a 1-0 lead from a penalty corner after just ten minutes before Georgie Twigg doubled the advantage in similar fashion eight minutes later.
Grace Balsdon’s 33rd-minute strike pulled one back for Hampstead but when Bourne got her second goal with 43 minutes played, Surbiton were on the verge of victory.
The Kate Richardson-Walsh and Sarah Kelleher-coached side did fight back as Emily Douglas scored with eight minutes left but they couldn’t find an equaliser as their winning run was ended at nine games.
Hampstead & Westminster remain top of the table on 27 points but Surbiton and East Grinstead are now just three points behind them heading into Christmas.
East Grinstead moved into that position as they impressively beat Clifton Robinsons 6-1.
The West Sussex side had their 14-match home unbeaten run ended by Surbiton last week but bounced back with three goals in each half.
Lydia McDonnell, Chloe Brown and Robyn Bentley all netted before half-time, with Bentley notching her second, the in-form Sophie Bray scoring once more and Eliza Wheeler finishing things off in the second 35 minutes.
Holly Munro’s goal from a penalty corner had briefly reduced Clifton Robinsons’ deficit to 3-1 but the hosts ultimately proved too prolific.
Clifton’s place in the all-important top six was already secure before the weekend and they will join Hampstead & Westminster, East Grinstead, Surbiton, Wimbledon and Beeston on the right side of the split after Christmas.

Beeston ended the first half of the campaign on a negative note, however, as Loughborough Students recorded their third victory of the season with a 2-1 triumph.
Olivia Hamilton scored after four minutes and Izzy Petter doubled the Students’ lead before half-time which meant that even though Mads Newitt’s effort set up a grandstand finish, Loughborough left as victors.

Meanwhile, in the battle of the bottom two, winless Swansea’s run stretched to ten games as they fell 4-1 to Holcombe.
Italy international Ivi Pessina scored twice, while Emma Bandurak and Candice Manuel also got themselves on the scoresheet for Holcombe, as Beth Wood grabbed Swansea’s only goal.
And the scheduled match between University of Birmingham and was postponed due to snow on the pitch.
There was also one game in the Women’s Conference Midlands that had been rearranged from earlier in the season and Bedford beat Broxbourne 4-1 to stay second in the table, moving to just three points behind leaders Sutton Coldfield.

Bees miss out on top six

Beeston, who were two points behind Oxted in seventh but with a better goal difference, landed the first blow in the sixth minute as Kai Aichinger scored from a penalty corner. 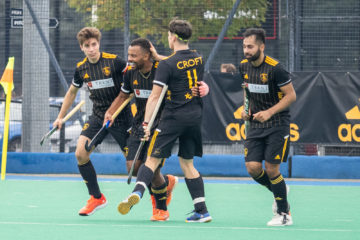 Beeston kept their hopes alive with a 3-1 win at home to University of Exeter, the goals coming from Robbie Gleeson, Sam Apoola and Gareth Griffiths.