Bees pick up point on the road against Brooklands

Four teams continue to be separated by just goal difference at the top of the Men’s Premier Division after another engrossing day.
Hampstead & Westminster, returning from competing in the EuroHockey League (EHL) last weekend, stole the show by scoring three goals in the last nine minutes to record a stunning 4-3 win over the University of Exeter.
Matt Guise-Brown struck twice in the 61st and 62nd minutes to draw the sides level after Exeter scored three times in four minutes during the third quarter courtesy of Matt Simmond, Seb Ansley and Luke Brown. That came after Matt Ramshaw had given Hampstead the lead in the first half.
After seeing Mannheimer draw level against them in the dying moments during their EHL KO16 game last Saturday – with the Germans winning the subsequent shootout – Hampstead then dished revenge out on Exeter as Rupert Shipperley scored in the final minute to hand them a third win in as many games.
However, despite their perfect start to the season, they sit fourth in the table on goal difference, with Old Georgians top as they recorded yet another huge victory.
Sam Ward struck four times for the second week in a row – taking his season’s tally to 10 – as they beat East Grinstead 7-0. Tom and James Carson were also on target, as was Liam Sanford.
Not to be outdone, Wimbledon beat Oxted 6-0 with Duncan Scott scoring a hat-trick. Callum Mackenzie, Eddie Way and Evan Kimber also found the back of the net as Wimbledon made it three wins in a row and certified their status as early season title contenders.
They sit third behind fellow London outfit Surbiton after they also returned to winning ways after suffering a shootout defeat in the EHL KO16 last weekend. They were made to work hard to keep up their 100% record by University of Durham but final quarter goals from Rob Farrington, Ben Park and Luke Taylor saw Surbiton make the long trip home with three points safely secured.

In the other game in the top tier, Brooklands MU recorded a second consecutive 3-3 draw as they played out another pulsating match against Beeston.
Brooklands led three times during the game with Peter Flanagan, Craig Getty and Andrew Jackson all getting their name on the scoresheet. However, Beeston found a way back each time, with Kai Achinger scoring twice and Gareth Griffiths getting the other as the Nottinghamshire side secured their first point of the season. 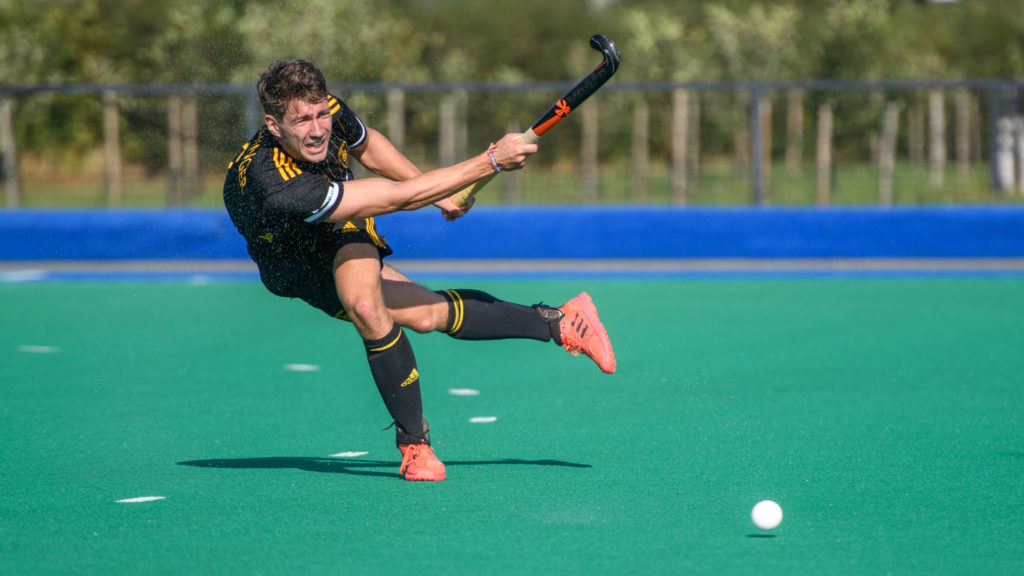 They couldn’t quite match the 10 they scored last week but Cardiff & Met were rampant in front of goal once again, beating Cambridge City 8-2 to remain top of Division One North on nine points. University of Nottingham continue to snap at their heels though as they beat City of Peterborough 6-0 for a third straight win, while Loughborough Students are also yet to drop a point as they beat University of Birmingham 4-0. Elsewhere, Olton & West Warwicks picked up their first points of the season with a 1-0 win over Bowdon while Sheffield Hallam also got off the mark courtesy of a brilliant second half fightback that saw them come from three goals down to draw 3-3 with Deeside Ramblers.
Reading continued their perfect start to the season in Division One South as they beat Team Bath Buccs 3-1 for a third successive win. Brighton & Hove made it two victories in a row – overcoming Sevenoaks 2-1 – to move third in the table, just behind a Teddington side who emerged 4-2 victors over Havant. Canterbury’s first win of the season – 5-1 against Oxford Hawks – moves them to fourth while Old Cranleighan also secured their maiden victory as they beat Southgate 3-1.
London Wayfarers held off a resurgent London Edwardians to win an absorbing encounter in the Conference East. They led 4-0 and 5-2 before Edwardians struck twice in the final two minutes to make it 5-4. However, they couldn’t find an equaliser and tasted defeat for the first time this season, while Wayfarers bagged a second win. Old Loughtonians dropped their first points of 2021/22 but sit top of the table after drawing 3-3 with Bromley & Beckenham. Richmond’s 4-3 win over West Herts sees them move to third in the standings, while Hampstead & Westminster 2s and Wapping were victorious for the first time this season by beating Indian Gymkhana and Spencer respectively, both games finishing 2-0.
Barford Tigers’ record remains unblemished in the Conference Midlands after they beat Bedford 4-0 to move to the top of the table. They displace Harborne by virtue of goal difference after they also won a third straight game, beating Cambridge University 5-2, while Harleston Magpies also have maximum points after they beat Lichfield 3-1. Khalsa Leamington’s 3-2 win over University of Birmingham 2s meant they notched their first points of the season, as did Loughborough Town in their 1-0 win over St Albans.

A dramatic late winner saw Didsbury Northern continue their impressive start to the season and end Timperley’s perfect run of form. Hosts Timperley were top of the Conference North heading into the game, with Didsbury third, but it was the visitors who would extend their 100% record to move up to second. They sit behind Belper, who take over at the head of the table after beating Beeston 2s 4-1 to claim three points once again. Preston recorded their first win of the season by beating Alderley Edge 2-1, with University of Durham 2s overcoming Leeds 1-0 in a close encounter. Wakefield also registered their first points of the year in a 1-1 draw with Doncaster.

Clifton Robinsons’ 4-1 victory moved them to the top of the Conference West on goal difference ahead of the University of Bristol. Both teams have won all three of their fixtures so far but Bristol slipped back to second after a narrow 2-1 win over Cheltenham. Isca’s emphatic 5-1 win over Fareham put them third, with Ashmoor fourth after they beat Plymouth Marjon 3-1. Cardiff University are fifth as they recovered from defeat last time out to beat University of Exeter 2s 2-1.