Lily Webb gave Clifton an early lead 4 minutes into the game, with the Bristol side dominating the early stages of the match, as the team shot narrowly wide before Jenny Rizzo in the Beeston goal came out on top in a 1v1. The Bees recovered from the early pressure and responded well, with Imogen O’Neill and Jillian Wolgemuth scoring within five minutes of each other on either side of half-time. An end-to-end game with chances coming aplenty, Beeston were the next to make their chances count as Alice Huddlestone found the back of the net with only a minute left to play.

Claire Thomas hit back seconds later with a sensational finish, deflecting the ball into the roof of the net, but it proved to only be a consolation as Beeston held onto their lead to secure the victory.

This Tier 1 Championship Final (known colloquially as the England Hockey Cup Final) made history for the club, with this being the first time the Beeston Ladies have secured victory.

David Griffiths, Deputy Chairman of the Club, said: “We’re absolutely delighted for the ladies’ team on their England Hockey Championship victory on Saturday. They’ve made history for the club and all the players and management team should be extremely proud of themselves.

“England Hockey have done a brilliant job in getting these finals concluded in a COVID-safe manner and the Hockey Maker volunteers on site this weekend were superb – constantly reiterating the social distancing guidance to everyone – they were absolutely brilliant.”

Beeston have been long-standing supporters of the Cup, believing it could be one of the most exciting competitions in England, were there a greater uptake from other clubs in the English Premier Divisions. The Cup is unique because a broad spectrum of clubs can enter. With enough skill, and a little bit of luck, any club can become the national champions. The Cup has a certain “magic” which can’t be replicated in other competitions.

Griffiths also said: “There are only two trophies up for grabs for outdoor hockey in England – the England Hockey league title and the England Hockey Championship title. I strongly believe there should be a European place awarded to the winners of either title. That would make clubs take both competitions seriously and focus their minds.”

We are looking forward to next weekend where the men’s 1st team take on Fareham in the men’s England Hockey Championship final at 3:15pm on Saturday.

The fixture will take place behind closed doors but will be live streamed on Bee TV.

Beeston men claimed their 6th cup win in the last 13 years on Saturday with a 9-1 victory against Fareham at Nottingham Hockey Centre. This is off the back of a phenomenal cup final win Read more…

Beeston Hockey Club are looking for an Under 12 Boys Head Coach for the 2020/21 season. 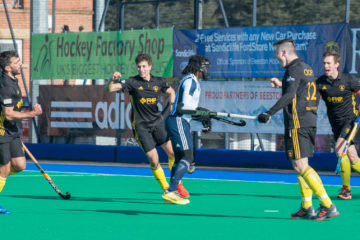 Beeston Hockey Club and England Hockey are delighted that U21 internationals Gareth Griffiths (Beeston) and Tim Nurse (Surbiton) have been recognised as 2020 TASS Stars Award Finalists.