Published by David Griffiths on February 14, 2020

Hanks, who has featured in recent games against the Netherlands and Argentina, travelled to Nottingham in the summer of 2018 having graduated from the University of Maryland. Colin Clarke, NTU Head of Hockey and Beeston Ladies’ Head Coach, picks up the story:

‘I coached against Carrie when I was England U21 Head Coach and Carrie played for USA U21. I was aware of her interest in coming to the UK for a masters. Mark Wadsley, NTU Ladies’ Head Coach, followed this interest up through her college in Maryland and we were able to connect Carrie and offer her the opportunity to come and work with us in the U.K, whilst studying for an MA in International Relations.

A major motivation for Carrie in coming to play at NTU and Beeston, having completed her NCAA career was to give her the best opportunity of making National Team selection, in the build-up to either the 2020 or 2024 Olympics. Mark and I have worked closely with US Field Hockey to ensure they are aware of Carrie’s development and working together on technical, tactical and conditioning targets.

During the Christmas break in the 2019/20 Academic year, Carrie returned to the States to trial for the US Senior programme. As a result she was selected to the US Senior National squad and we now wish her all the best both in the Pro League as well as her ambition to qualify and take part in the 2024 Olympic Games.

Carrie came to NTU as a Postgraduate Scholar, where she received a wide variety of support from both Beeston and the university to assist her in achieving her performance potential. Opportunities and support which Carrie received in her time in Nottingham are now available for other elite student athletes to access under the recently announced extended partnership between NTU and Beeston.

NTU and Beeston will also soon be announcing a new range of scholarships available to international athletes.

Carrie’s next appearance for the USA comes early on Saturday morning (UK Time) as they take on New Zealand in Christchurch – you can watch live on BT Sport 3 from 4am.

Carrie Hanks in action for Beeston against Holcombe. Phot by David Kissman Photography 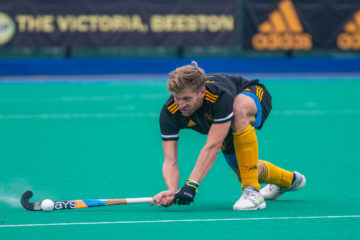 England and Great Britain ace, Ollie Willars, is set to join HGC in the Netherlands for the 2021/22 season.

As a result of the latest coronavirus lockdown – Beeston’s men’s and ladies’ first team players have banded together to start our junior hockey sessions on Zoom! The sessions will be between 10am and 10:30am Read more…

All junior training on Sunday 3rd January has unfortunately been cancelled due to snow on the pitches.