Published by clubbuzz on October 1, 2016

Born in Salta in Argentina, 24 year old Rosario joins the Bees for the season from her home club Ciudad de Buenos Aires while she studies for a Masters degree at Nottingham Trent University.
The Argentina U21 international who has also played two uncapped games for her country will add some experience and South American flare to a Beeston side who have made a promising start this season.
Beeston Manager, Chris Glover, is delighted that Rosario has arrived, commenting “We have been working on getting Rosario here for some time now. We initially made contact about a year ago, and we are delighted that we have now finally got her here and into a Beeston shirt. Adding an overseas player is something that not only brings you some real quality on the pitch, but also gives the dressing room a lift having a player of Rosario’s calibre.”
Rosario, who speaks fluent English after her three years in American University was ecstatic to have finally made it to Nottingham. “I have been desperate to get over here and now the paper work is all sorted I can’t wait to get into the Beeston shirt. Beeston is a club that is know not only in England but also around the hockey world so to get a chance to play for this club was one I could not miss out on. I am very excited to play my first game with the girls this weekend and I hope I can make a strong contribution this season.”
Beeston play a top of the table clash with Brooklands today in Manchester. To see Rosario’s home debut, come down to Nottingham Hockey Centre next Saturday, 8th October, when they play Timperley at 2pm.
Categories: Beeston Hockey Club 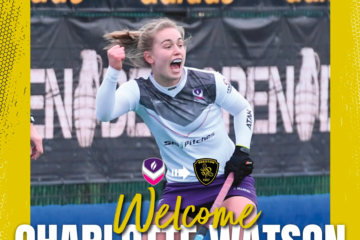 Beeston Ladies 1st XI are delighted to announce the signing of Scotland international, Charlotte Watson. Alongside Scotland commitments Watson is also part of the Great Britain squad training ahead of the Paris Olympics. Watson, who is Read more…